Magazine - Back IssuesAutumn 2021News on an Emerging Vegan World
August 29, 2021

A selection of highlights from the news in recent months. 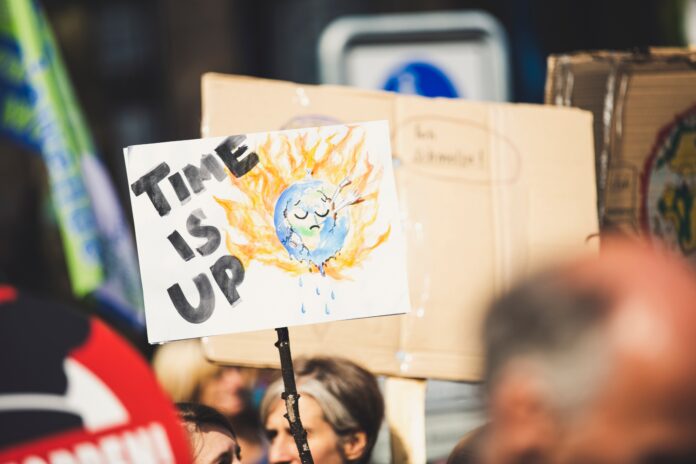 IPCC Report is a ‘Code Red for Humanity’

The latest report from the Intergovernmental Panel on Climate Change, released in August, says that it is now ‘unequivoval’ that climate change has been caused by human activity, causing “unprecedented” impacts on earth with some changes likely to be “irreversible for centuries to millennia.” UN Secretary-General António Guterres said that the findings were “a code red for humanity.”

The authors of the report say that since 1970, global surface temperatures have risen faster than in any other 50-year period over the past 2,000 years. You can read more about the report and what actions you can take here.

US federal agency NOAA (the National Oceanic and Atmospheric Administration) has reported that July was the world’s hottest month ever recorded.  The previous record, set in July 2016, was equalled in 2019 and 2020. The combined land and ocean-surface temperature for July was 0.01°C higher than the 2016 record.

“July is typically the world’s warmest month of the year, but July 2021 outdid itself as the hottest July and month ever recorded. This new record adds to the disturbing and disruptive path that climate change has set for the globe”, a NOAA spokesperson said.

EU to lift ban on feeding animal remains to livestock

The EU is to lift its ban on feeding animal remains to domestic livestock.  The use of processed animal protein (PAP) in the feed of cattle and sheep was banned by the EU in 1994 as a result of the BSE crisis.  The last case of BSE in EU cattle was in 2016.

The change in the regulations, which came into force in August, will allow cheap pig protein to be fed to chickens.  It followed a last-ditch attempt by a coalition of MEPs, led by the Greens, which failed on Tuesday to kill the policy. The move has been brought on by fears that EU farmers are being undercut by lower farming standards elsewhere.

EU to ban cages for farmed animals by 2027

The EU Parliament has voted overwhelmingly in favour of banning the use of cages in animal agriculture by 2027.  The End the Cage Age European Citizens Initiative, which involved over 170 NGOs and was signed by 1.4 million EU citizens, spent three years working on a proposal to prohibit the cages.

About half of the egg-laying chickens in the EU are raised in cages and the majority of female pigs spend at least part of their lives in a cage.  The ban will apply to laying hens, sows, calves, rabbits, pullets, quail, ducks and geese, affecting over 300 million farmed animals.

A new report by independent think-tank RethinkX says we need to remove government subsidies for animal agriculture so that disruptive technologies can take over and reduce carbon emissions.  The report, entitled ‘Rethinking Climate Change’, says that 3 major industries – energy, transport and food – can eliminate more than 90% of greenhouse gas emissions worldwide.

The report singles out disruptive technologies such as lab meat and precision fermentation, which it says can create protein that is ‘higher quality, safer and better for the environment’.  Precision fermentation is a process that enables the programming of micro-organisms to produce almost any complex organic molecule.  Its costs are dropping exponentially because of rapid improvements in the technology.

The report predicts that by 2030 the number of cows in the US will have fallen by 50%, and the cattle farming industry will be all but bankrupt.  It says that other animal industries (including fisheries) will quickly follow the same fate.

An investigation by the charity Animal Aid revealed that 4,000 former racehorses were slaughtered since the start of 2019 in the UK and Ireland.  Most were trained in Ireland and had been owned and trained by high profile figures in the racing industry.  Some horses were said to be carrying ‘career-ending’ injuries.

Covert footage captured by Animal Aid shows breaches of rules designed to protect animals from unnecessary cruelty. The footage was made public in a BBC Panorama program aired on July 19th.  Regulations state that horses should not be killed in sight of each other, as it causes extreme distress.

Campaigners say excessive breeding is leading to the slaughter of thousands of horses each year, causing an ‘equine crises’.  Animal Aid is directing people to a petition calling for limits to unrestricted horse breeding.

A report released in July by the UK’s National Food Strategy outlines how the nation’s diet must change by 2032 in order to improve standards in public health, the environment and animal welfare.  It recommends that meat consumption should be reduced by 30% and that fruit and vegetable intake should increase by the same amount.  Fibre intake should increase by 50%, while foods high in fat, salt and sugar should decrease by 25%.

The report explains that one of the most effective ways to reduce carbon emissions and free up land for nature is to cut back on animal proteins. Plant-based protein produces 70 times less GHG emissions than beef, and requires less than 1% of the land.

The report also calls for a package of measures to facilitate the development and manufacture of plant-based and alternative proteins in the UK, which could potentially create around 10,000  jobs.

67 infectious disease experts wrote to Boris Johnson ahead of June’s G7 summit, to urge him to take the lead on a global fur farming ban.  The letter follows more than 400 outbreaks of SARS-CoV-2 on mink farms across Europe, the USA, and Canada.

The letter reads: “It’s clear fur farms have the potential to act as reservoirs of SARS-CoV-2.  The intensive breeding conditions typical on fur farms – animals unnaturally crowded together, poor hygiene, stress, injuries and low genetic diversity – are ideal for the creation and spread of novel pathogens.  Severe animal welfare deficiencies are inherent to factory fur farming. The trade creates the potential for the many tens of millions of animals on fur farms to act as immediate, intermediate, or amplifier hosts for viral pathogens.”

In June an international group of over 60 scientists called on the European Commission to shift its funding for food advertisements away from animal products and towards healthier and more sustainable plant-based diets. Among the scientists is the world-renowned conservationist Dr. Jane Goodall.

In a letter to the Commission, the scientists note that recent Commission policy documents such as the Farm to Fork strategy for a healthier and more environmentally sustainable food system and the Beating Cancer plan recognise the need for a shift to more plant-rich diets.

Despite this, in recent years the Commission has spent a large proportion of its advertising budget on animal products.  Some of these advertising campaigns have explicitly aimed at reversing a decline or maintaining growth in meat consumption.

“This policy needs reform so that it supports public health, environmental protection and animal welfare instead of putting them at risk,” the letter says.

30 tonnes of endangered fish species discarded in one year

A report by Irish investigative journalism platform Noteworthy revealed that over 30 tonnes of endangered fish species were discarded in one year by boats fishing in Irish waters, including the endangered basking shark and critically endangered skates.

Three-quarters of sharks and rays that live in our oceans are threatened with extinction.  Over the past 40 years, the global abundance of these sea species has declined by over 70% due to an 18-fold increase in fishing pressure.

But many of these endangered fish are still being caught in the nets and hooks of vessels while fishing for commercial fish.  When this happens, they must be thrown back overboard (discarded) immediately.  However, many do not survive this ordeal.

Across the Atlantic, a number of US senators have sponsored a bill titled the Farm System Reform Act.  Americans tend to show more resistance to regulation of industry, and this tendency is reflected in the agricultural sector where standards have slowly declined over the past few decades, to the point that now many countries around the world are wary of importing American agricultural products.

The Farm System Reform Act would cut down on massive factory farms across the US, referred to as concentrated animal feeding operations, or CAFOs. These factory farms are an issue because they have monopolistic tendencies, extremely poor animal welfare standards, and are incredibly polluting. In addition to breaking up the CAFOs, the Act would promote small, family-run farms and create a healthier competitive landscape by increasing market transparency, prohibiting predatory tactics such as ranking systems for paying contract growers, and restoring country-of-origin labels for animal products. While the Act has not been passed, it is a sign that the age of unrestricted, highly industrialised agriculture in America is becoming increasingly unsustainable.

Animal agriculture ignored at COP26 Vegans say they are disappointed at the lack of discussion...

World losing its appetite for meat Per-capita consumption of meat is set to fall by...
Previous articleEU global food emission inventory
Next articleEU continues with massive supports for Animal Agriculture