Julia Feliz Brueck talks to us about her new book: 'Baby and Toddler Vegan Feeding Guide'. 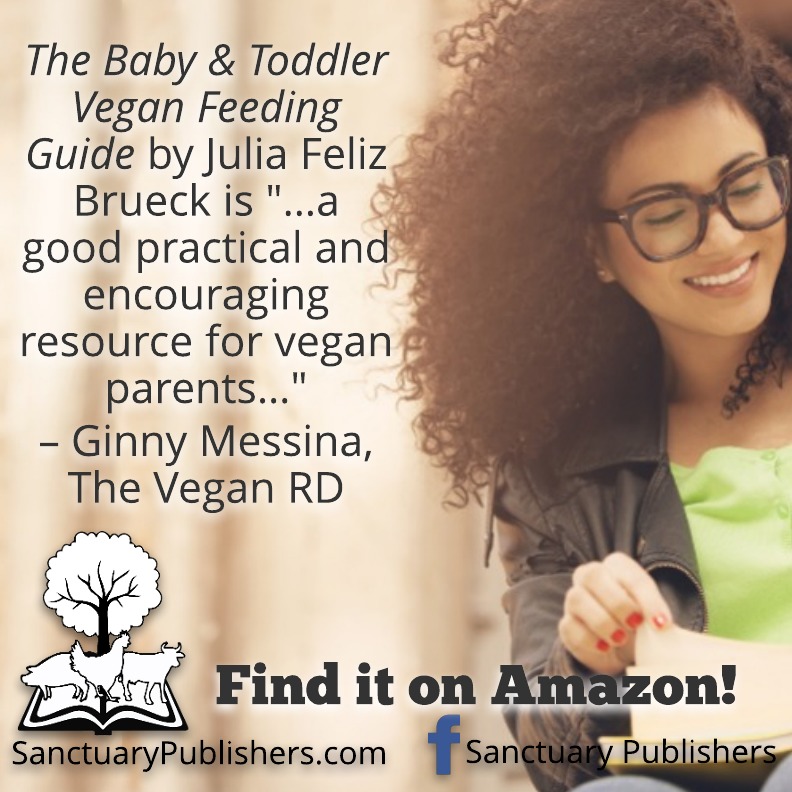 Veganism, a movement that works against the oppression of nonhumans from humans, is not only ethically sound but also environmentally beneficial in the now and for future generations. It’s also a lifestyle that invokes a specific diet which has been repeatedly pronounced as healthy at all stages of life. Statements supporting plant-based (vegan) diets from conception, infancy, and beyond have been released by major dietary organizations across the world. Yet the idea that following a vegan lifestyle is dangerous continues to garner detrimental headlines. While there is an obvious bias that propels the media to continuously shine veganism in a negative light despite the evidence-based support, as a movement working towards the justice for all, we must understand where these biases come from and how to arm new vegan parents with the best available information on raising their children.

Unfortunately, there are times when unsupported health claims or myths have become viral leading new parents down a dangerous path. “Freshly pressed carrot juice is as good as breastmilk for a newborn” read a comment in a vegan parenting group. Dismayed by the statement, I decided to finalize the Baby and Toddler Vegan Feeding Guide: Simple, evidence-based, and dietician approved. At the time, I had had two healthy vegan pregnancies and while my youngest was just a newborn, my oldest was thriving (still is!) on his plant-based diet and our vegan lifestyle.

Ironically, the original catalyst for the book was the birth of my oldest son. At the hospital, we were harassed by a medical professional upon realizing that we were a vegan family. The person recalled one of the stories often published by the media to support their claims that raising vegan children was not possible. Thankfully, being knowledgeable scientists, my partner and I were able to stay secure in our commitment to raising a vegan family, and with the help of a vegan lawyer, we were able to get the hospital to pass a directive that protects vegan parents’ rights at that hospital. However, I knew something more needed to be done. I worried for new parents that may not be as confident in a world where vegans already face social pressure. Once a child arrives, you are no longer the sole focus of never ending questions and most times, you are the only vegan parent you know in a very non-vegan world. Therefore, finalizing the guide became a healing opportunity for me to empower other parents with evidence-based information on raising their children on plant-based diets.

Using my scientific research skills, the guide is backed by reliable evidence that is not only supportive of their choices but also up-to-date on how-to when starting babies on solids and beyond. The guide was also reviewed by Ginny Messina, the Vegan RD, to ensure its accuracy nutritionally. And lastly, it is short and to the point so parents have the maximum amount of information as quickly as needed in a way that is easy to go through and use should parents ever find themselves in a situation like mine. Most importantly, the guide walks parents though recognizing pseudoscience and staying clear from it through the knowledge of a vegan parent also in the field of science. As with books from Sanctuary Publishers, the Baby and Toddler Vegan Feeding Guide also helps support a vegan organization. The chosen organization for the guide is Chilis on Wheels who helps give warm vegan food and supplies to humans and nonhumans in need. The rest helps Sanctuary Publishers continue to publish much needed resources for vegans by vegans.

Supporting parents during a vulnerable time and guiding them how-to safely feed their vegan children with the best information out there is imperative if we are going to continue to build a strong movement despite what the media spins. We do this by ensuring that parents and guardians have access to the right information in a way that is simple and accessible. As a form of activism for non-parents, in an effort to break down myths purported by the media, I ask that you consider donating a copy to your local pediatrician’s office, hospital’s maternity ward, public nursery, town library, and/or other venues that cater to families with young children. Working together, supporting one another, and helping our movement grow for the benefit of nonhuman rights, future generations, and the health of our planet, is the only way forward.

You can find the book on Amazon, Vegan Essentials, or the Sanctuary Publishers website.

Julia Feliz Brueck is a mom of two, a decade-long vegan, published author & illustrator, as well as the founder of Sanctuary Publishers, www.sanctuarypublishers.com, a vegan publisher helping to raise the voices of nonhumans and other marginalized communities.

Chickens  Half of all new-born chicks are male.  Males are of no use to the...
Previous articleThe Facts about Cultured Meat
Next articleWhy is Fiber Good for you and How to Get Enough Fiber!