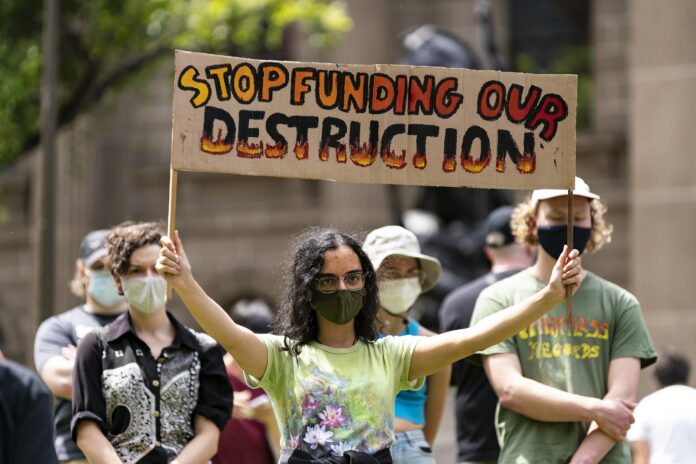 20,000 delegates and world leaders from 200 countries gathered in Glasgow in November to tackle the climate emergency. The 26th ‘Conference of the Parties’ summit was regarded by many as the world’s last chance to come up with solutions to the climate crisis, and to keep global temperature increase to no more than 1.5°C above pre-industrial levels.

Even before the summit began there were reports that a meat industry lobby giant had waged a campaign against the EU’s Farm to Fork strategy – a series of proposals aimed at creating a more environmentally-friendly food system. Copa-Cogeca, a cooperative of EU farmers, reportedly spent a staggering €1.7m on plans to influence MEPs.

Then there were the private jets.  About 400 of these flew into Glasgow for the talks.  It was pointed out that 50% of global aviation emissions are caused by the use of private jets.  Jeff Bezos, Prince Charles, Joe Biden and Boris Johnson were among those criticised for their choice of transport.

Next came the menu.  We had all hoped that the delegates would finally see the light and opt for a completely plant-based menu.  But it was not to be.  Instead, the menu heavily featured meat and dairy, albeit with a climate footprint value for each item.  Some of the delegates were alarmed by the menu choices and by the long queues for the meat-based options.  Campaign group Animal Rebellion compared it to “serving cigarettes at a lung cancer conference.”

And so, we could do nothing but wait for the end of the summit in the hope that something positive would come out of it.

Main points of the deal

A deal was finally reached on the 13th of November.  The final 11-page document is called the Glasgow Climate Pact.  Here is a summary of the main points:

COP26 president Alok Sharma said: “We are well aware that ambitions have fallen short of the commitments made in Paris.  We have kept 1.5 degrees alive.  But its pulse is weak, and it will only survive if we keep our promises and translate commitments into rapid action.”

How did people react to the deal

Commentators say that our chance of staying within 1.5°C is either still alive (just), or it is now out of sight with the world heading for up to 2.4°C of warming.  90% of countries have submitted plans for reducing carbon emissions, but many go nowhere near far enough to support a 1.5°C warming threshold.  As mentioned above, the parties have agreed to come back together in 2022 with revised and strengthened plans.

However, many scientists and environmentalists applauded the outcome. “It’s basically as good as one could hope for,” said Robert Stavins, an economist at Harvard.  Commenting on the new global carbon market rules, Jae Edmonds, a climate scientist at the US Department of Energy’s Pacific Northwest National Laboratory said: “If those savings were reinvested climate mitigation, it would more than double the projected annual emissions reductions in 2030.  There are tremendous opportunities here.”

The Vegan Society said it was disappointed by the “slow and uninspiring targets for tackling methane set at COP26” – despite the fact that methane has a global warming potential 84 times greater than CO2 across a 20-year time frame. Louise Davies, CEO of The Vegan Society, commenting on the Glasgow deal said: “We know that time is running out and we need to bring methane emissions down substantially and quickly – and proposing to reduce it by just 30% just isn’t enough. Food really does feel like the cow in the room – it’s not that we’re lacking the solutions to address food and agriculture but it’s just that there’s still so much reluctance to have that conversation in the first place.”

UNEP Food Systems and Agriculture Advisor James Lomax said the world needs to be “rethinking our approaches to agricultural cultivation and livestock production” in order to slash greenhouse gas emissions.

Plant Based News pointed out that the meat industry is a major driver of deforestation. Forests are being cleared to create pasture for cattle grazing and to grow soy as animal feed.  Yet there was little or no discussion of the role played by animal agriculture.  While the deal aims to reduce methane leaks from new and existing oil and gas pipelines, it fails to tackle the meat and dairy corporations responsible for the biggest emissions. Livestock emissions account for roughly 32% of human-caused methane.

Vegan climate change activist and lecturer, Dr. Alex Lockwood said: “This is probably the most depressed I’ve felt about the climate emergency in the last 20 years.  I’ve spent time at this conference on the edge of tears.”  In an article published in Sentient Media, Lockwood suggested a number of reasons why animal agriculture was not up for discussion at COP, including the fact that the vegan movement has limited lobbying power as compared with ‘big agriculture’.  He also pointed out that it was generally felt that it was unfair to ask developing countries who already have many challenges to deal with (such as poverty, lack of access to clean water, dangers from unsafe cooking fuel, and climate challenges) to stop eating meat.  Purported sensitivity to this issue by the richer Global North, Lockwood says, hides the fact that per capita meat consumption is much higher in these countries.